“You can’t get good by staying home. If you want to get fast, you have to go where the fast guys are.” — Steve Larsen

It’s mid-December, but I’m sweating in my short-sleeved jersey as I push my body up the grade from Javea’s medieval Pueblo towards El Montgo, our local monolithic peak overlooking the Mediterranean. Since the road only traverses the ridge at the base of the mountain it isn’t one of the region’s hardest climbs. But it is still iconic for its narrow twists and turns, precipitous drops, and breathtaking views of the blue-green sea and the towns of Jávea and Denia. As I was nearing the top the three-kilometer climb, it hit me that no one had passed me, a point of pride for any cyclist, particularly those of us well into middle age.

But my spirits sank as I neared the top and heard the unmistakable sound of a rider gaining on me. I’ve never been caught and overtaken so quickly on a climb; this guy absolutely dusted me. The blow to my ego was significantly softened, however, when I saw that he was wearing the telltale black-on-yellow kit of Jumbo Visma, one of pro cycling’s three strongest teams. I imagined that the young man could be one of their Grand Tour winners, Tom Dumoulin or Primož Roglič, or maybe Steven Kriujswijk, who has finished in the top five in all three grand tours. The rider slowed a bit when the grade flattened out on La Plana, and I made a vain attempt to catch him, both out of pride and to identify him. I closed the gap just a bit before he resumed what was, I imagine, his routine pace, blasting away towards the descent to Denia.

The thing is, I’m not a half bad rider. I’m not trying to sound brash, not at all. But like a lot of other folks out there including many of my good friends who are dedicated and experienced, albeit amateur, cyclists, I can hold my own. And a lot of people I know are plenty stronger. But if you’re in this category, and I know a lot of you are, you’ve probably also realized that until you’re on a bike, going along at your usual clip and feeling pretty chuffed, but then get dropped like you were standing still by someone who is in a completely different league, you operate under the illusion that maybe you’ve still got a fighting chance. It’s an ego check for sure.

The professional road cycling season is one of the longest in sport. The races kick off in January with events in Australia, South America, and other Southern Hemisphere locales. It then moves to the Middle East and the Mediterranean before venturing north to the spring classics in Belgium, France, and Italy. Many of Spain’s 17 Communidads, including Valencia, have pro races early in the year that offer a warm up for the world’s best riders. Each week throughout the summer includes multiple races all over the world, including the trio of three-week grand tours in Italy, France, and Spain. The season begins to wind down after the world championships, typically held in September or October, though there are a series of road races through the fall. This year, the Tokyo Olympics will offer an additional target for many riders, including specialists in the single-day road race, time trial, track, and mountain biking.

After a brief respite that is for the most part measured in mere weeks, professional riders must start to train for the next season. Many road riders, including Mathieu van der Poel and other giants of the sport, forgo an off season by racing through the winter in brutally challenging cyclocross races. Here in the Alicante province we are blessed by excellent cycling conditions: favorable weather, sparse traffic, healthy local food, and access to climbs of all levels and lengths. This is why many amateur cyclists settle here, and it’s also why many pro teams choose it as their winter training grounds.

Jumbo Visma trains in Denia, just over the Montgo ridge from Jávea, as do AG2R and Team CCC, which includes one-day specialist and reigning Olympic champ Greg Van Avermaet. The Jumbo rider who passed me was likely on his way back to their training camp after a day in the saddle. Team Sunweb and Deceuninck-QuickStep, two more of the strongest teams, train down the coast in Calpe. And Astana makes its winter home just beyond in Altea. Movistar and others also train in the area and we have seen them on our local roads. The majority of the remaining teams train elsewhere in Spain, primarily in Majorca, the Canary Islands, and Catalunya. And these are just the top-tier UCI World Tour teams. Many other Continental and Professional Continental level teams also train in Jávea or elsewhere in Alicante.

As soon as the calendar turned to December, we began seeing cycling pros in and around Jávea. It started with a sprinkling of CCC riders here and there, followed by entire Continental teams and their cars. On the day that I got smoked by the Jumbo Visma rider, I was riding up the coast to escort a cycling trekker who was staying with us on her way from Valencia to Sevilla.

Just after my moment of shame, I pulled into a gravel road to check my phone and the status of the rider I was meeting. At the pull off I came face-to-face with a small group of riders standing around a Deceuninck-QuickStep team car. I immediately recognized Remco Evenepoel, generally regarded as the world’s most promising young rider. Last year we had witnessed him demolishing his competition—after losing significant time on a crash—to take home a junior World Championship in Innsbruck. Just before we arrived in Austria for the race he had also cruised to the rainbow jersey in the junior time trial. As a rookie pro in 2019 he took the cycling world by storm by winning several races against the big leaguers—including Spain’s Classica San Sebastian and the European time trial championship—and taking silver in the elite World Championship time trial. He won perhaps even more applause for his heart a few days later when he gave up his own chances in the World Championship road race by stopping to help his mentor and teammate Phillipe Gilbert. This emphasis on sacrificing for the team is one of my favorite elements of cycling. Evenepoel is currently held out as “the future Eddy Merckx,” the greatest cyclist of all time.

In the group I also recognized Danial Oss—Peter Sagan’s shaggy headed teammate on Bora-Hansgrohe—and, I think, Remi Cavagna of Deceuninck-QuickStep. We exchanged head nods before they pulled out, heading back down towards Javea, probably en route to Calpe. On the way down to Denia I saw a couple more CCC riders dancing up the climb. At least I was spared the indignity of getting blown away by any other speedy overtakers, but I am prepared for that to happen quite a bit during my future winter rides.

On a side note, the woman I met on that ride is part of a network of cycling trekkers and hosts called Warmshowers. It connects touring cyclists with supportive people offering to host them. Hosts can offer a variety of services from a yard to in which to camp, to a bed, food, and/or laundry. We have hosted for years and have met only considerate, fun, and fascinating people. Indeed, a few have become good friends. Our latest guest was no exception: a hearty young woman from England; a recent graduate in marine biology, who eagerly took long swims in the chilly Mediterranean the evening and following morning of her stay. If you are interested in either travelling by bicycle, meeting and helping bike trekkers, or both, check it out at www.warmshowers.com. 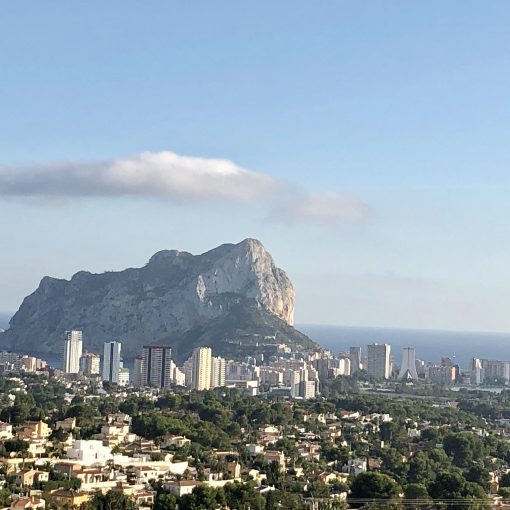 There are, indeed, few merrier spectacles than that of many windmills bickering together in a fresh breeze over a woody country; […]

One thought on “The Boys Are Back in Town: The Pros Return to Jávea”